Hey everybody! Today’s post is another manga haul! Jessica and I recently went on our honey moon down to St. Augustine, Florida. While we were down there, we grabbed a ton of manga. Check it out!

As you can see, I scored quite a bit of Zatch Bell. Volumes 1-10 to be exact. This is so awesome for several reasons. For starters, I loved Zatch Bell as a kid. The anime anyway. I never read the manga. So I’m excited to give it a shot. Secondly, I bought this as a bundle. So I did not need to scour the web looking for each volume and I didn’t even have to pay shipping since it was in a local store. Shout out to Ancient City Toys in St. Augustine! For those wondering, Zatch Bell is now my 4th most collected manga series in just 1 purchase. Not bad!

The next round of pictures depicts mostly Jessica’s books. She took a shot on the Dot Hack Legend of the Twilight Volumes 1 and 2. She was only going to get volume 1 but I reminded her how hard it is to get mangas without resorting to the internet so she got the second one while we were there. Next she got Mahoromatic Volume 1. I also told her to get volume 2 of it for the same reason. Some how she forgot to grab it.

The last four books were bought at the local 2nd and Charles in St. Augustine. Two were mine. Two were Jessica. Jessica bought two discounted mangas named Fairy Tale Battle Royale (Sounds intense) and Faeries’ Landing (Doesn’t sound nearly as intense). I don’t know the first thing about these books.
I bought a discounted manga for myself, Dragon Drive. I also don’t know much about it. It does, however, look awesome. It will surely show up as a Manga Monday review soon enough. Lastly, I got The Way of the House Husband. This book sounds awesome. It stars a retired gangster member turned stay at home husband. This was a running joke with Jessica and myself as I was a full time student while she worked.

So there you have it! I think a pretty awesome, sound group of mangas that I am pumped to get around to.

Thank you all for reading! Have a great day!

The last post I made was about our cat, Elizabeth’s vet visit. She is fine now. At that time, we were stressing out about keeping an eye out on her. Our AC unit broke, our hot water unit messed up and we were planning our honey moon. And to make things even worse, Crunchyroll stopped playing anime. We had watched the first 3 episodes of Tokyo Revengers and than boom… Crunchyroll stopped loading anime.

With all that said, our AC unit is fixed, our water heater is fixed, Elizabeth is fine and Crunchyroll is working again. We would like to make another comeback.

I know we were doing daily post for a while and you may think we got burned out. Well, due to our broke AC unit, we literally burned out. But, metaphors aside, we have just been sorting out things in our life. Personally, I really want to get back into the swing of blogging and keep any momentum going forward.

With that in mind, I have been making a lot of video game related videos over on my Youtube channel. Be sure to check those out as I’ve been talking about the Zelda 35th Anniversary and how to make collecting fun and affordable for example.

Anywho, thank you guys for reading and sticking with me. Again, not promising daily post, but I am going to try and get some regularity going back on the blog! 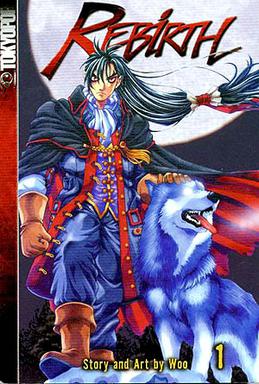 Characters:
Deshwitat-
He is the main character and is a vampire endowed with dark magic. He is absent for most of the manga as he floats in limbo until the seal is broken. I’m led on to believe we get to know more about him in later volumes and that he will be quite interesting. As of right now, he is a cool, strong lead who seems to be morally gray. He is bent on defeating his enemies and avenging his love. Standard stuff, cool design.