Oh, boy. One of the mangas I was most hyped to get into and now it is here. Did it live up to my hype? Lets find out!

My Hero Academia was created by Kohei Horikoshi and distributed through Shonen Jump Comics. 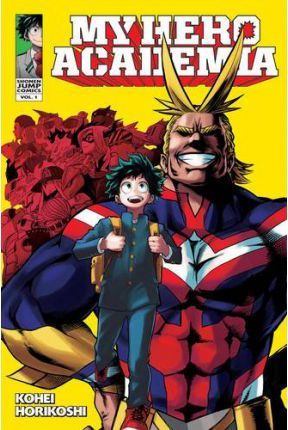 Spoilers: Considering this is just Volume 1, not really.

Plot- In this version of the world, humans are born in a similar fashion to X-men. Kids have quirks which is the equivalent of super powers. Our main character, Izuku Midoriya, is quirkless. This obviously adds to his charm. He eventually inherits a very powerful quirk All For One (Which summons the dude in the cover. The one in the costume). From here, He joins the academy for super heroes.

Characters– Here’s the thing, I like all the characters. Its hard to go into depth since the manga introduces about 6 real players, but we do not dive into a lot of them. The two characters we delve into are Izuku Midoriya and  Toshinori Yagi. Izuku is our main character (The other dude on the cover.). He has two defining moments. The first one is when he sacrifices time (to get points for his exam) to save Ochako Uraraka (another likable character). The other moment is when he stands up to Katsuki Bakugo (the school bully). These two scenes  will make you root for Izuku throughout the manga. Toshinori on the other hand chooses to keep his identity relatively private. He is the former All Might (*reminder* that’s the name of the buff dude). He is reaching his limits as All-Might takes a toll on the body. He sees potential in Izuku and passes the All For One quirk down to Izuku.

The World– Again think X-men in Japan. It is a great idea. However, I don’t know how much of the world will be explored as the story centers around the academy. However, it definitely has potential with all the super heroes and villains running around.

Recap-
Action: You’d probably be surprised to find that there isn’t that much action. There are a few intense fightscenes, but right now it has been more of a “prove yourself” through trail-like events.
Romance– Izuku and Ochako have some potential flames, but nothing has really happened yet.
Plot- The plot has been engaging so far.
Characters– A+. All pretty good.
The World- Like a lot of Vol 1 reviews, it has not been flushed out yet.
Humor- Solid A.

Verdict– A near perfect introduction Manga. It showcases the potential for interesting characters, sly humor, possible love subplots, and intense action scenes. It serves as a great origin manga.

Score- 9 out of 10. Not too many bad things to say. It is not action in every panel, but it does offer a good bit of substance for a Shonen Jump. It does fall into the formulated “no one believes in you, grind, get stronger, become powerful” sequencing that has defined the genre since before I was born. If you can look past it being cliche at times, it is a great take on the genre and worth the read

Thank you for reading my review! Follow me here for more reviews as I will be reviewing Tokyo Ghoul soon and even revisiting Seven Deadly Sins with the second volume. I also do other reviews such as Anime and Video games as well as Top 5’s and discussion post! You can also subscribe to my Youtube channel here and follow me on Twitter here

Ushio and Tora is an anime based of the manga with the same name written by Kazuhiro Fujita. The anime is directed by Satoshi Nishimura and ran through MAPPA studio.

This series ranked two on my most anticipated anime of the summer. In short, it lived up it.

Plot: Ushio is a young boy who is left to look after his dad’s temple while he is away. Upon cleaning, he falls into a basement where he meets a demon trapped by the beast spear, the one his dad had been telling him about. Here in the basement with the exchanging of dialogue between the two, I knew I was going to love this anime. An unlikely of bonds is formed when Ushio must unleash the demon to save his friends. The two will now attempt to work as a team to stop the remaining demons Tora’s demonic aura attracts.

Characters:My favorite part of the anime. I will just be talking about the two title characters. Ushio is a lovable main character. He is very funny, loves his friends, and is actually quite fierce. He never truly seems scared of Tora. In fact, he quickly takes control of him. Tora is hilarious for an “evil spirit turned good guy by force” character. I am absolutely amused by their dynamic together and can’t wait to see them grow has demon hunters.

The World: It is pretty standard. The fantasy aspect of it comes from Tora’s aura attracting evil spirits.

Recap: My favorite anime so far, I wish it was already done so I could just watch all the episodes at once. Watch this anime if you’re into action anime with comedy. Lets break it down by category:

Action: There wasn’t action until about 20 minutes into it, but that’s okay. It was awesome and I know future episodes will have great action as well.
Romance: You get the sense of love triangle between Ushio, Nakamaru, and Inoue. I haven’t read the manga so I don’t know what develops but my money is on Ushio and Nakamaru.
Story: The story may not be groundbreaking but I’m definitely into it and sets up for an awesome story.
Characters: Ushio and Tora alone are awesome. I hope Nakamaru and Inoue play larger parts in later episodes.
The World: As mentioned, the world doesn’t seem any different from your average anime other the fact there are demons on the loose.
Humor: Hilarious anime. It doesn’t just rely on them two bouncing off each other. Ushio is pretty funny by himself and when he is around Nakamaru they’re funny as well. Definitely a strong point.
The Ending: Maybe the best ending I’ve seen from the summer animes. It ends on a high note and has me so beyond pumped for episode two.

Verdict: Anybody who loves a great action show with funny characters to go with it needs to watch this. It has been my favorite summer anime. Go watch it.

Say hello to the 1st of my new Top Ten Anime Lists! All of my reviews are essentially recommendations for series’ to (or not to) watch, and unfortunately I can’t always find the time to write/post about every one of my favourite anime series’. My remedy for this is to write Anime Top Ten Lists which will let me provide more recommendations across various genres. Anyway, without further ado…Top Ten Time!

“I think it’s wonderful! 2D…A woman’s not a woman until she loses that third D”
“Takebayashi! That’s your first line?! Are you sure?” 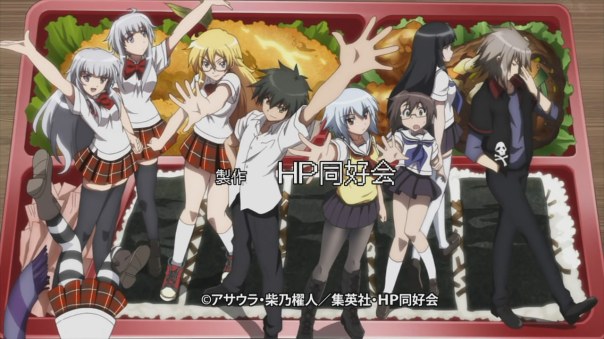 What’s that? You want an anime that takes a normal act like buying lunch and turns it into a battle of honour, deception and all-out violence? Well that’s what you get with Ben-To. After being physically beaten while reaching…

Posted in Cool Stuff I Reblogged