After a pretty long haitus from anime reviews, Crunchyroll and Facebook have teamed up to pull me right back in. Dr. Stone is an ongoing anime based on the manga of the same name. The anime is done by the studio TMS and airs on both Crunchyroll and Funimation.

Spoilers: This is a review of episode one. While there may be spoilers for episode 1, there’s no major spoilers for the series as a whole.

Plot: The idea here is that everyone on Earth gets turned to stone. Some 3,000 years later our two main characters breakthrough their stony exterior emerging to a world where forestry has now overrun the area. Thousands have died as their stone bodies have shattered or limbs have been severed off. Once our two main characters, Senku and Taiju reunite at the base of a river, the two go to work on how to bring the world back to the modern era.

Characters: This section is fairly easy, as they are the only two human beings alive at the moment. Senku is our green headed main character. He is a genius and the show makes that no secret. He has already begun working on a cure for the modern day stone age. I really think people who study psychology and character types would have a field day enjoying him. It’s not really revealed in the first episode, but later you will see he does not play judge, jury, or the hangman. He acts almost like neutral watcher. He wants to revive everyone. Good, bad, murderers, tax collectors, children, bums, it does not matter. I assume this is due to the fact that science really does not take sides. He’s just letting the process run it’s course. 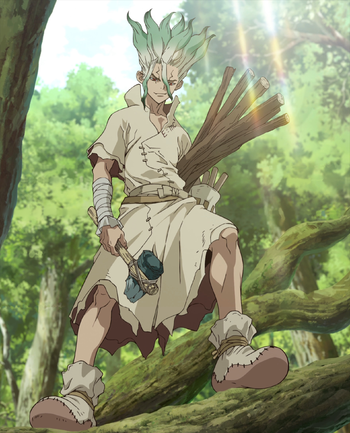 Our next character is Taiju. Taiju is a bit more of a flat and uninteresting character. Now, that is in no way to say he a bad character. He kept himself motivated to live because he had a mission. Before the stone age struck, He was determined to tell his crush Yuzuriha, that he liked her. Of course, tragedy struck as both stone-crossed lovers were soon to be sealed in their rocky casing. But hey, his unwavering desire to confess his feelings for Yuzuriha worked because, well… It is an anime after all.

Now, I’m not sure if this a good or bad thing, but the show is super self-aware of the two character’s strength and weakness. Again the show is not shy about constantly reminding you Senku is an intellectual supreme while Taiju wouldn’t know the difference between a push or pull door even if they were labeled. As a result the show has a stereotypical, albeit funny, role system for the two. Senku comes up with ideas while Taiju goes to hunt down the ingredients needed. The two play off each other’s differences in a way that naturally progresses the plot while also being funny and enjoyable such as the grapes to wine scene for example.

The World: This is also easy. There essentially is no world to discuss here. Mother Nature has come to reclaim most of her land. Some statues have survived the test of nature and time, but they are few and far between. Animals, for some unknown reason, were spared the same crystallized fate the humans experienced, birds notwithstanding for some reason. This is part of the fun though. How will Senku and Taiju interact with animals? Will they find remains of old buildings they use to interact with? Are there others who have shattered their mold and now walk with the living again? How will the world react to a sudden rise in the human population again? Ultimately, the world right now is a blank canvas and I cannot wait to see how Dr. Stone splatters itself all over the page.

Racap: I knew this was the anime I wanted use to rekindle my spark. This premise sounded super enjoyable and I have not been disappointed. I’ve watched the first three episodes as of now and it really keeps getting better.

Action: While nonexistent in this episode. Episodes two and three do help deliver more of a punch.
Romance: Taiju clearly has a crush on Yuzuriha but you will have to keep watching to see if they end up together.
Plot: I came for the plot.
Characters: But I stayed for the characters.
The World: Empty and underdeveloped, but that isn’t exactly a bad thing.
Humor: A definite strength and high point of the show is the humor. For a pseudo-apocalyptic world, these two really don’t let that fact stop them from smiling or cutting up.
The Ending: The ending is great as we see they have possibly cracked the code for cracking open that hard outer shell.

Verdict: While this is episode one of a show that currently only has four episodes out, I’d be lying if I didn’t say the hype is there. It is going to be so fun to see what’s left of the world. If Senku and Taiju have shed their rock skin, whose to say other’s could not? How will differing viewpoints of Senku and people he resurrects clash? The world is currently empty which hurts this episode’s score but I think makes me more excited for the show as a whole.

Score: A solid 8.5 out of 10. Mostly, because there are still so many question marks that is hard to get a perfect score.

I will revisit this one once the season has wrapped up. So let me know what you guys think so far. What animes should I review next? Let me know down below.